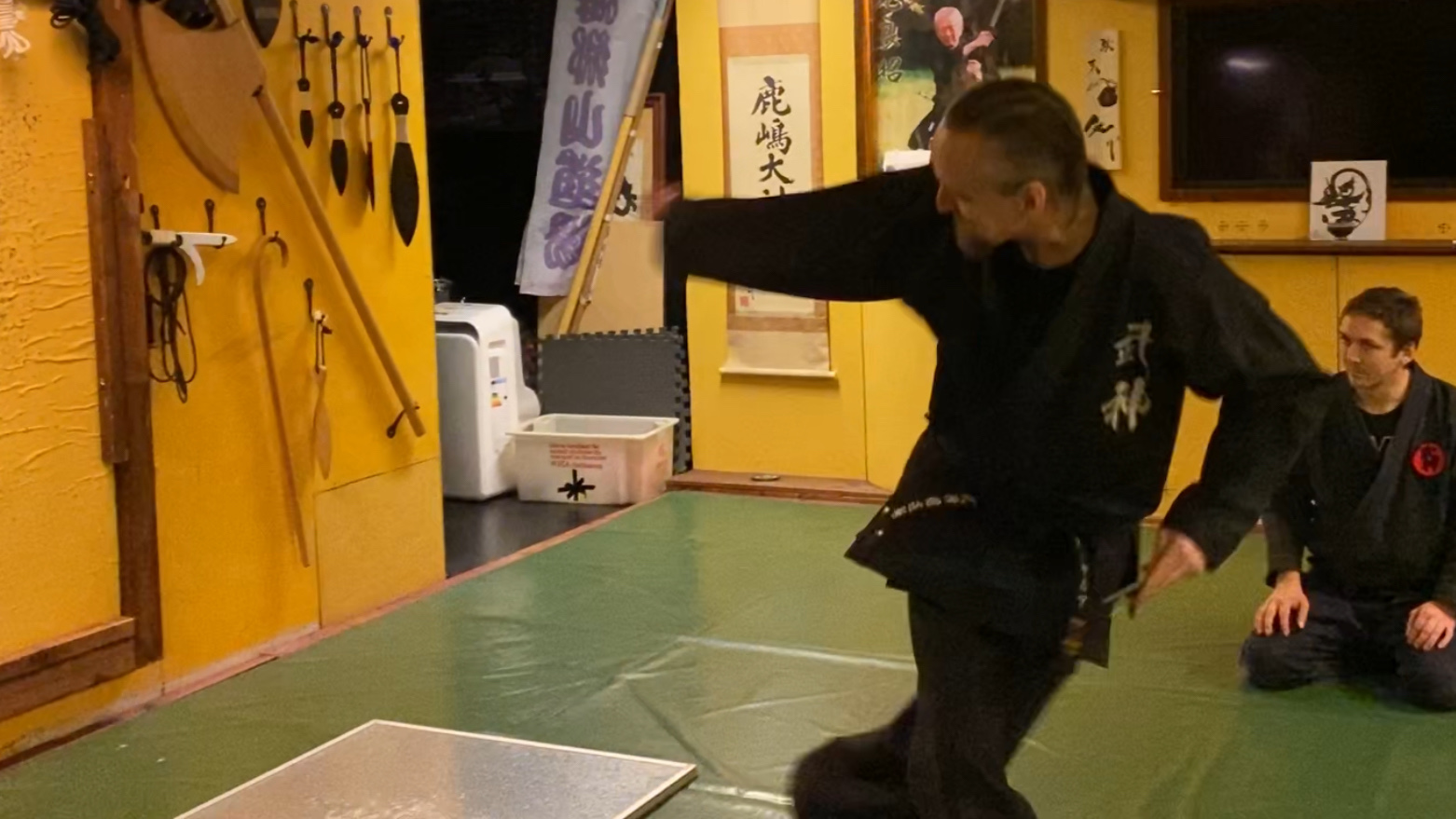 Last Tuesday I practiced BŌ-SHURIKEN at KAIGOZAN DOJO. I made up my own Bō-shuriken Kata. I will explain below. Enjoy!

I’m not going into detail how to start practicing because it is too difficult explaining. But basically you always start close to the Makiwara. I tell my students to start close. When the Shuriken is hitting the target good, they should take one short step back. If the next Shuriken does not hit good, do not step back until the next Shuriken hit good. If they manage to hit with all five Shuriken, they can start further away and repeat. As long as all five hit good they can start working on longer distances. When learning a new throw or with the non dominant hand you always start close.

Scroll down to see the video.

This is the order I throw the Shuriken. I’m throwing the 4’th Shuriken with my left hand. So I prepared by flipping it with the point outward.

Prepare by taking this Kamae. Aim with the left hand against the target and hold the right hand over the right shoulder and head. Zanshin.

1. Migi Hon-uchi. Shift the weight forward to the left foot and throw the first Shuriken with the right hand. Bring the left hand to the left hip.

3. Migi Gyaku-uchi. Step forward with the left foot behind as in Yoko-aruki. Throw the third Shuriken from under with the right hand. Use the momententum from the left step to increase the power.

4. Hidari Yoko-uchi. Spin around anti-clockwise and throw the fourth Shuriken with the left hand directly.

5. Migi Hon-uchi. Finish by throwing the fifth and last Shuriken with the right hand.

As you can see only one Shuriken hit good. Most Shuriken are “dead” and only one is “live”. The rear end of the Shuriken should be lower than where it hit, if it is higher the weight is not going into the target so much. It is rather going upward. These hits are called “dead”. When the Shuriken is completely level or the rear end is lower than the tip it is called “live”.

I did a Gyaku-uchi where the rotation was the opposite way. I don’t know which Shuriken that was, maybe it was “live”. Also the two Yoko-uchi might also be “live” as it was rotating sideways.

Bitchute does not allow me to embed video’s. Click here to visit my Bitchute video channel.

Throw me an e-mail if you are interested getting me for a seminar.