I think most of you have heard about the 45° step when you do the basic jodan-uke for example, this does not mean that you end up in a 45° angle to the attack that I so often see. I think this is a misunderstanding, and I will explain here so that you have to be an idiot if you don’t understand ;-).

But first let’s make some reference points. To get the distance right we need to understand that the opponent will hit you in the head with his right fist. And that you want to end up at a safe distance where you can block the opponent’s right arm from the inside without being to close or too far away. So you need to move your whole body as one unit about one arms length. So measure how far that is. I will use the tatami mat as a reference point so that you can easily understand. I recommend that you also use the tatami mat as I do here so that you can do the step without looking. And then look down and check if you are on the correct spot, angles and length wise.

Remember that you move the body one arm’s length, it doesn’t matter how long the opponent’s arms is. If he knows how deep he should punch (just through the target and not an inch more!) it will be perfect distance for you. 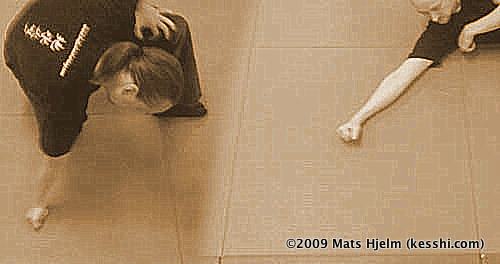 When you move from point A to point B in the first step you should have the exact same angles but one arms length further back to the side. You should have rotated the whole body about 30° to the left, but the angles and alignment should be the same. 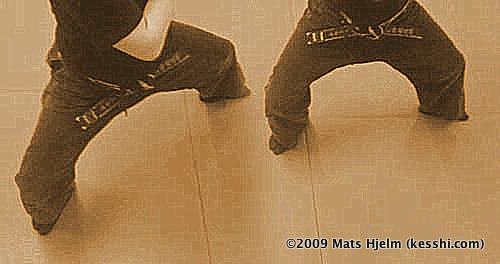 So when you start in the basic Ichimonji no kamae both heel’s should be on the same line and pointing directly against the opponent’s center. I won’t go into detail about anything else than the footwork here. I might do a part two of this tutorial later? 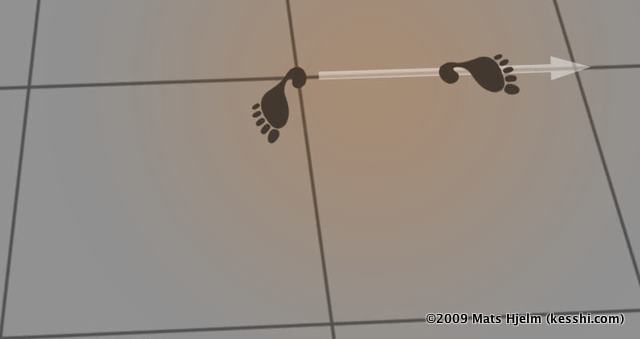 The right foot and toes should be pointing exactly 45° back to the right against the other corner of the tatami mat. Keep a rather low position with both knees bent (in basic training, be extra low), more weight on the right leg. 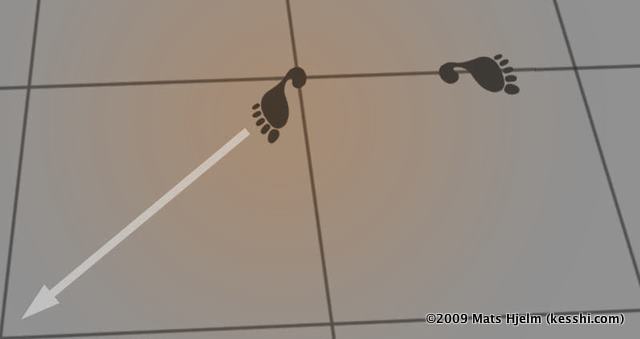 Lift the right foot and push the body strongly and quickly back to the right with the left foot. You should explode from the position, so make sure the front leg is not too straight. Do not move the left foot first (I say that this is a bad habit). If you keep your right arm straight against the opponent, he will not step on the left foot, as he have to move around your arm. 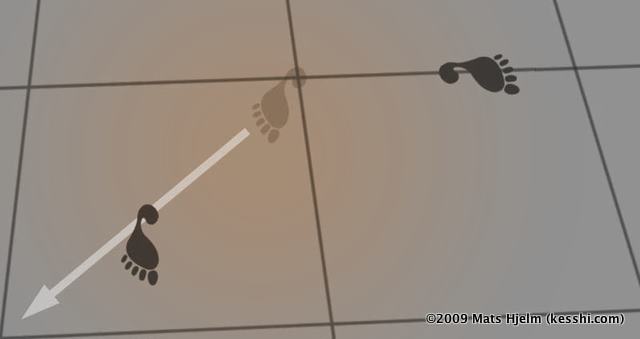 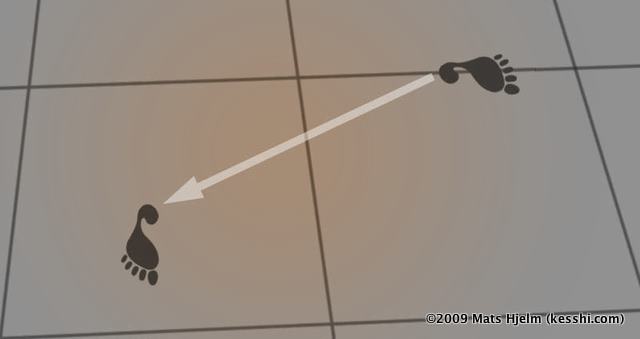 As you can see this angle is about 30° from the starting point. Also worth mentioning is that the feet’s is never this wide apart as it is rather a jump than step, step. It is important that the upper body should not go anywhere else but straight backwards to the side as if you where on wheels. 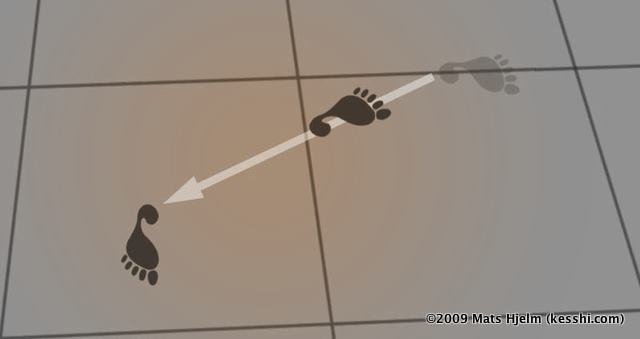 See how the left foot ends up on the same line. Now you have moved the body 30° back to the right. You should end up in the exact same position as when you started. Your kamae is “closed” and good, aimed directly to the opponents inside.

From here you block and take his balance… as you can see you have also opened up the opponent’s lower region. You have the opening where you will place the right foot as you step in and counter with your own attack.

A very good training drill is to stand in Ichimonji no kamae and move from point A to point B as explained above. Repeat this several times, you should move in a big circle keeping a perfect Ichimonji no kamae the whole time. Then change side and do it to the left. This is a good exercise that strenghten your legs and gives you a good foundation.

Most beginners in Bujinkan learn how to step to the side from a punch to the nose and do the circular movement with the arm and knock the opponents arm to the side and take his balance. Then you just step in and finish him off with a kiten-ken to the neck. This is one of the first techniques you learn in Bujinkan, the technique is called Ichimonji and it is from the Kihon-happo.

But the basic way of blocking can be found in many, many techniques in Bujinkan. Last year or was it the year before I saw one of the Shihan in Japan doing blocking in honbu dojo as a warm up before the training. I noticed he did it kind of different than I’ve seen it before so I put it away for the future.

And then maybe 4-5 months ago I started experimenting on this idea, but only a little and then I forgot it again. I didn’t think it was that important. Then I picked it up again last week and practiced some more, I also started to introduce it to my students a little (without to much explaining).

Then at the training yesterday I was testing the students Sanshin no kata and Kihon happo, I didn’t say anything, I was not happy. And sorry to say I got a little pissed off to (some of the students must have noticed). So I had to do something about it, we had to go back to the basics, the very very basic way of blocking without opening yourself up, without loosing the kamae. This might sound easy, and maybe it is.

This might sound strange, but after almost 25 years since I did this “simple” movement the first time and all the following years hard work it struck me… that the way I have done this simple movement for years and years until yesterday was really quite crappy! I had just discovered a “new way” of doing the very basic Jodan-uke, it felt so right and I was so happy coming to this insight.

I’m sure I haven’t discovered anything new, someone have probably done this “new way of blocking” for a long time, well actually I said before I saw it in honbu so it can’t be new, but it is new for me. I realize it must be quite discouraging for a beginner in the Bujinkan to hear someone that have been training so long just discover something so simple after 25 years of training. It really takes special persons to stick with a Martial Art like Bujinkan Budo Taijutsu. This might be why so many people quit training after 5 or 10 years, they are not that kind of person that have the patience that is required.

I think you can learn BBT in 5-10 years and have a very basic and good understanding of the art, but if you keep searching you will find more. Soke once was asked what the highest level was, and he said he didn’t know, because there is always something after the highest level. It’s not necessarily a higher level, but it is another level you have to pass to get to the next level. For example if you think there is something that is perfect it isn’t really, it can always be refined and even more perfect, but there is nothing that is perfect, there is always the next level. My point is never give up and think you know the perfect way of doing even the most simple basic technique, you can always polish your techniques (Masai) to become better.

Sorry for the spin off!

Another thing that may contribute to my recent discovery is after a discussion last month after training in honbu. I went out with some local friends that have trained Bujinkan for a very long time, but they have also trained other koryu sword arts. One of them said something really interesting things about limbs of the arm going in separate directions when drawing the sword. That in combination with the jodan uke became a very different feeling, and it is that which makes this (jodan-uke) so special I think.

Yesterday we spent some time on the fifth* technique, the omote ken sabaki technique, some call it omotegyaku tsuki, the name is not important. But it was when I demonstrated this technique that I realized I found something important.

When I just wrote fifth technique above I remember I asked one of the students to pick a number between 3 and 8, he picked 4, so this was the kihon happo we would spend time on. But I meant a number between 4 and 8, I did not intend to spend time on Juumonji because we had already done enough jumonji for this training. But the number 4 is just the omotegyaku without the punch. So if I would have picked number 4 I would not have made this discovery and this article would not have been written. When things like this happens I strongly feel there is someone/something guiding me.

I’ve been struggling with how to end this article, but I think I can say that I have just explained why I still keep practicing BBT. I do get “intellectual rewards” like this quite often, maybe this was one of the biggest in a long time, but it is things like this that makes me keep going.

So in conclusion I’d like to thank everyone who helped me, from Hatsumi Soke to the little guy that said “number 4” yesterday. Bujinkan is a wonderful art and I wish you all had the patience to keep on going, that is the most important thing of all, if you do you will understand more and more, even after 25 years of training. My last words seems just perfect, and it really says it all…