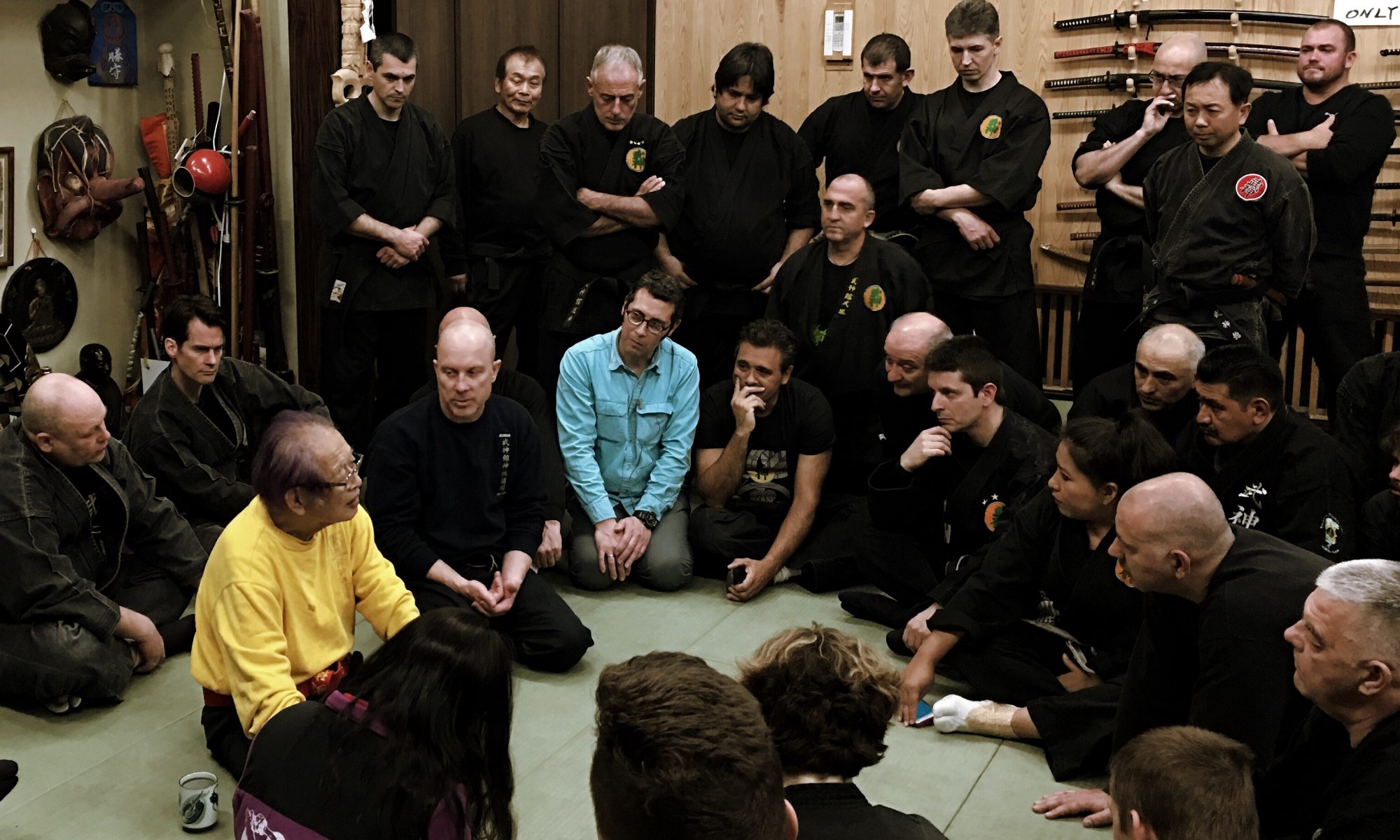 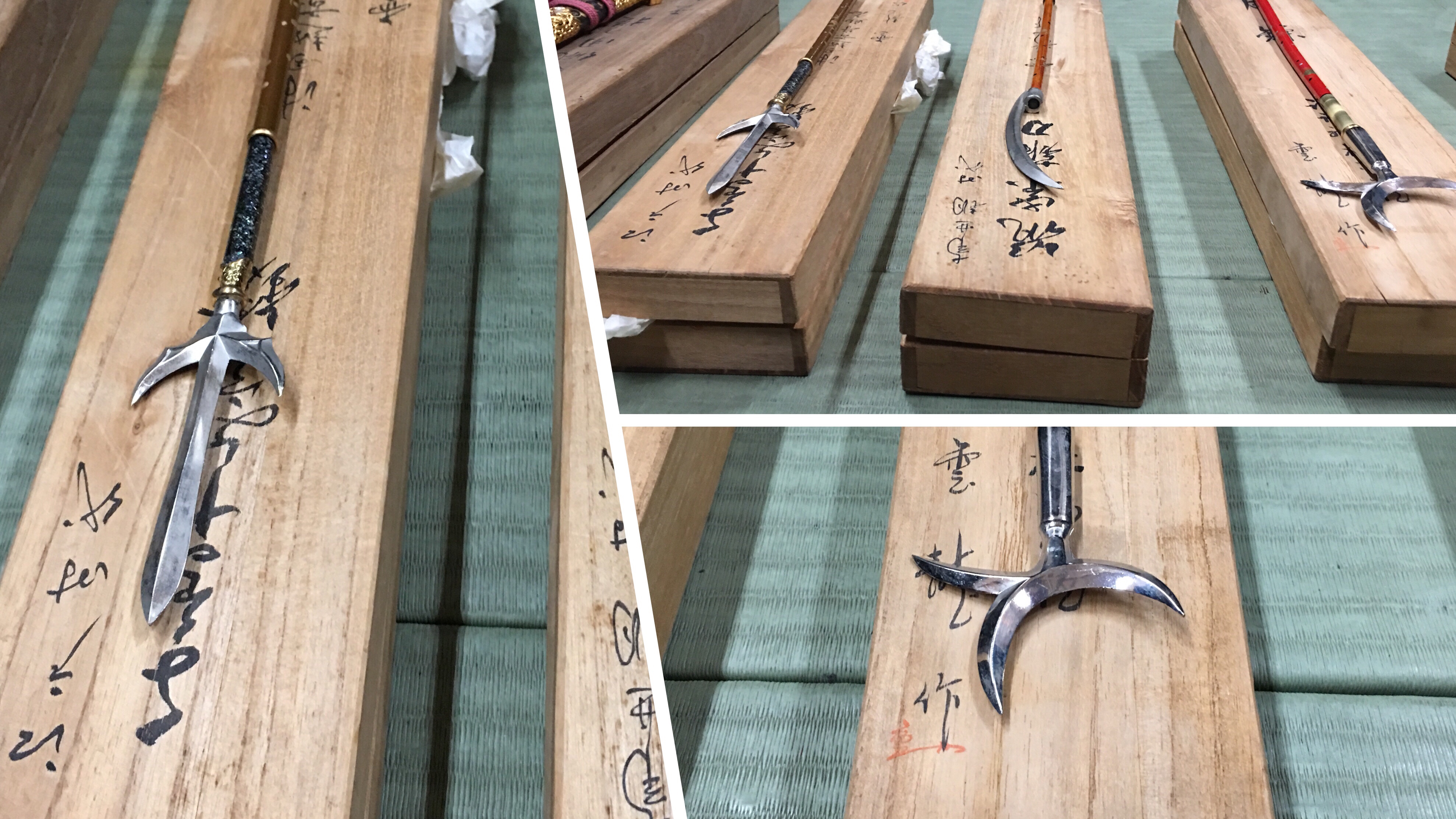 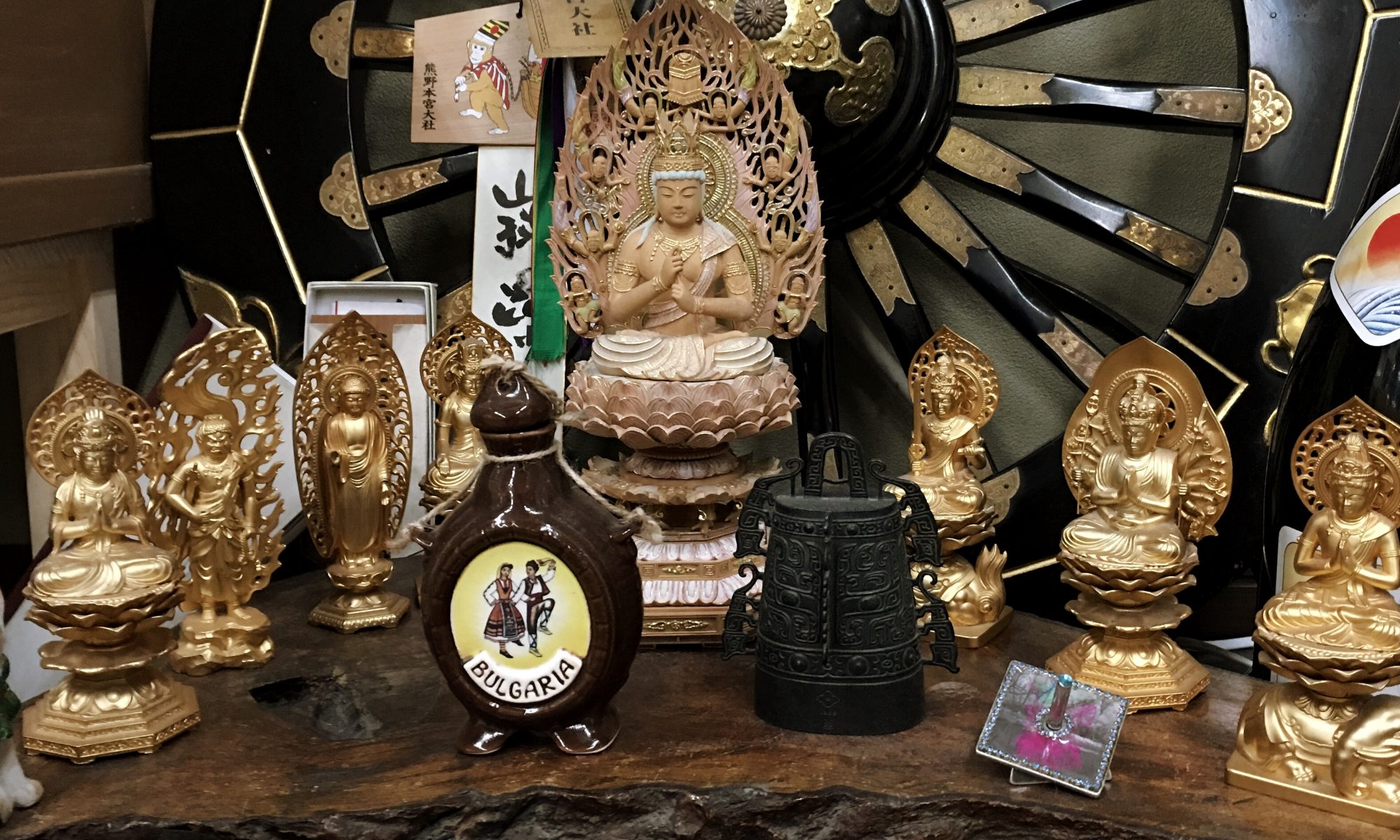 文殊 MONJU (Guardian of the Law, Voice of the Law) is one of many meanings. Monju is considered the wisest of the Bodhisattva, and thus acts as the Voice (Expounder) of Buddhist Law.

Japanese sculptures of Monju often depict the deity sitting atop a roaring lion or shishi, which symbolizes the voice of Buddhist Law and the power of Buddhism to overcome all obstacles. Shishi are also commonly found guarding the entrance gate to shrines and temples. Monju typically holds the Sutra of Wisdom in the left hand and a sharp sword in the right, which Monju uses to cut through illusion and shed light on the unenlightened mind. In some artwork, Monju carries a lotus flower and sits atop a shishi (mythical lion).

Monju’s cult was introduced to Japan by Ennin 圓仁 (794-864 AD; also spelled 円仁), a Japanese monk who visited Wutaishan (a five-terraced mountain in China’s Shanxi Province that today is still a major center of the Monju cult) during his travels to China (838-847 AD).

Mañjuśrī is a bodhisattva associated with prajñā (insight) in Mahayana Buddhism. In Tibetan Buddhism, he is also a yidam. His name means “Gentle Glory” in Sanskrit.[1] Mañjuśrī is also known by the fuller name of Mañjuśrīkumārabhūta,[2] literally “Mañjuśrī, Still a Youth” or, less literally, “Prince Mañjuśrī”.

A mantra commonly associated with Mañjuśrī is the following:

oṃ arapacana dhīḥ
The Arapacana is a syllabary consisting of forty-two letters, and is named after the first five letters: a, ra, pa, ca, na

Tibetan pronunciation is slightly different and so the Tibetan characters read: oṃ a ra pa tsa na dhīḥ (Tibetan: ༀ་ཨ་ར་པ་ཙ་ན་དྷཱི༔, Wylie: om a ra pa tsa na d+hIH).[14] In Tibetan tradition, this mantra is believed to enhance wisdom and improve one’s skills in debating, memory, writing, and other literary abilities. “Dhīḥ” is the seed syllable of the mantra and is chanted with greater emphasis and also repeated a number of times as a decrescendo. 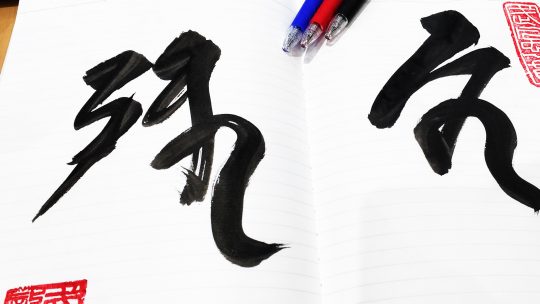 Bujinkan Keiko 2018
As far as the training goes, it is basically the same as previous years. A lot of Mūtō-dori against knife, sword and rokushakubō. Very often Sōke uses his fingers to “walk” across the hands, which finally captures a finger lock. He makes the attacker to forget he got a weapon in his hand and he just pick it out of the hand of the surprised Uke.

Even when it is Taijutsu, the concept of Mūtō-dori is the same principles used. 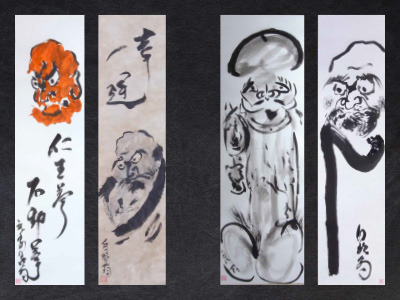 This is a book in the planning by Steve Olsen, he is looking for people backing his book on Kickstarter. If he gets enough backers he will make the book, if not it won’t be a book. It is up to you if there will be one.

During break in his martial arts classes at the Bujinkan Hombu Dojo in Noda City, Japan, Hatsumi-Sensei paints for his students. He paints calligraphy and pictures. His art contains advice to his students and historical influence from the nine Japanese martial traditions he is the head instructor of

Our designer, Dan Saal, is a real pro. He’s an award-winning art book designer and he knows how to design beautiful books that bring the essence of topics to life. Dan’s sample layouts already look great and I look forward to working with him to finish the project. 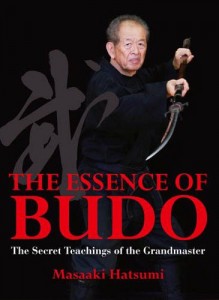 The new book Budō no Gokui by Hatsumi Soke is available for pre-order now for only $23.60, it will be shipped in the end of June.

In a quick hirameki of what is to come in this book (without giving too much away) is the artistic look at the bigger picture of the mindset of Hatsumi Soke in his interpretation of the Pinnacle of Martial Arts. The message to Bujinkan practitioners will be standardly consistent as ever, if you are of the “Keep Going” tribe in the sense that the secret to martial arts can be found in…

– Doug Wilson (one of the translators of this book)

Budo transcends simple combat techniques to ultimately attain a world of peace. Budo includes an array of martial arts developed in Japan, among them Aikido, Judo, Karatedo, Kyudo, and Kendo. In this book, grandmaster Hatsumi explores the essence of Budo, and demonstrates a range of important techniques relating to this essence. The author also reveals secret techniques and the hidden principles of the martial arts, and elucidates the words of his master, Toshitsugu Takamatsu, on Budo and life. Including some three hundred beautiful pictures depicting the author demonstrating his techniques, and around one hundred pictures of rare works of calligraphy, illustrations, and hidden documents on the martial arts and their role in Japanese culture, this book will be relevant and insightful to practitioners of all martial traditions including Judo, Aikido, Karatedo, Kendo, Kenjutsu, Jujutsu, Iaijutsu, and other various fighting sports.

Masaaki Hatsumi was born in 1931. After progressing through various martial arts, he found his life’s mentor, Takamatsu Toshitsugu, and studied under him for the next fifteen years, becoming the 34th Grandmaster of Togakure-ryu Ninjutsu and eight other arts, which he unified into the Bujinkan system. While travelling the world, teaching thousands of individual students as well as law enforcement agencies, he received numerous accolades from politicians and spiritual leaders of many nationalities.

Click here for more of my recommended Bujinkan book!s

Here is a trailer from the coming Daikomyousai 2009 DVD from Quest, yes that’s me in the picture behind the guy in glasses, and Duncan Stewart as the Uke for Soke.

Here is a rough translation of the above. Three day Kobudo seminar held by Masaaki Hatsumi Soke, the successor of the last Ninja, Takamatsu Sensei. People from the whole world attended. Complete recording of all three days. November 30, 2009 Dec 2, Tokyo.