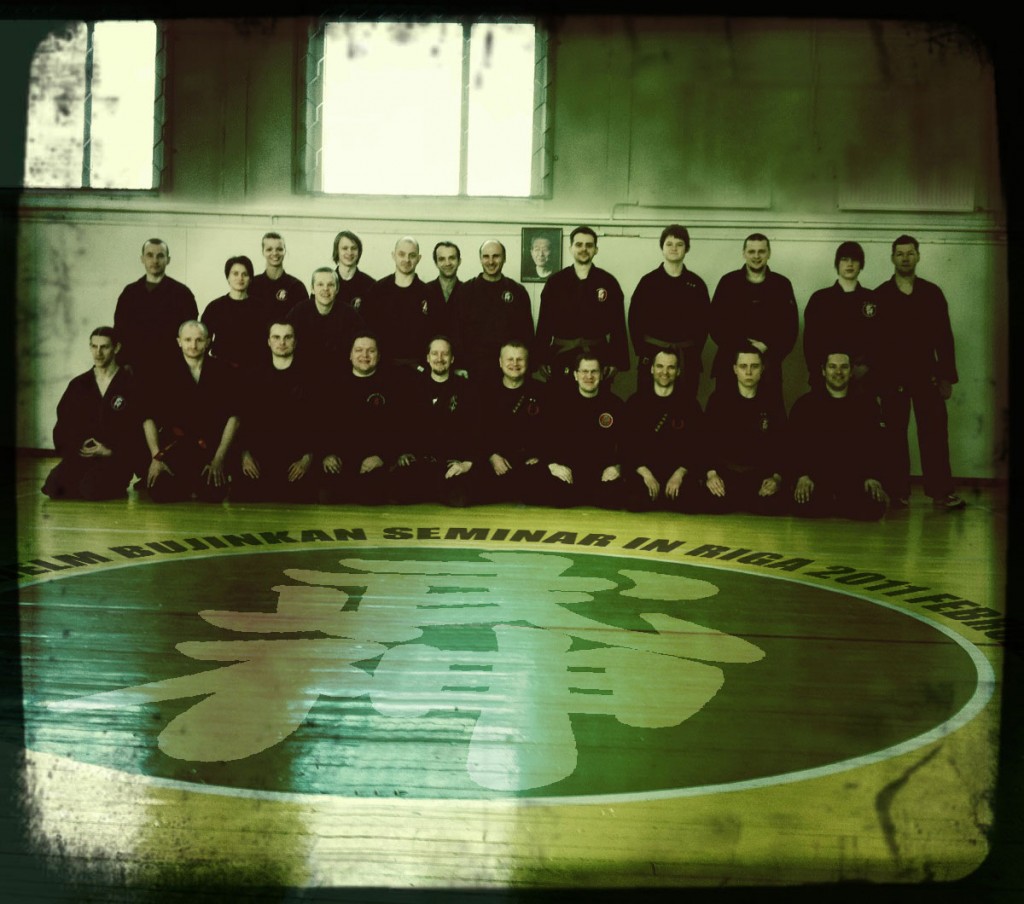 The past weekend I was invited by Juris from Bujinkan Kurokawa Dojo in Riga to teach a seminar on Sanshin no kata and Juttejutsu.

On Saturday I showed and explained the way I feel is the base for Sanshin no kata. First we did the traditional warm-up routine; doing the first technique five times on the right side, and then five times on the left side, and finally ten times alternately on right and left side. Then the same with all the other four techniques. Sanshin no kata consists of five simple techniques… 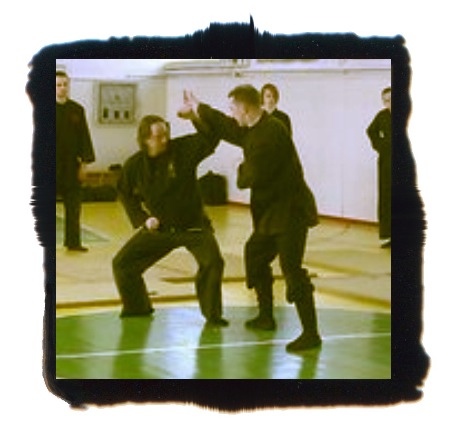 In the early 1980’s there was a “guy” that had only been training a couple of years and interpreted these techniques with Buddhism and created his own philosophy around these techniques. He wrote many books on the subject, and almost everyone copied his idea. It was a very nice idea, but it was not the Sanshin no kata that Hatsumi Soke taught as many people believed at the time (and unfortunately still believes). Do not think of the elements too much. Just simply look at them as a way of counting, nothing else.

Some people talk about three different ways of doing these techniques and they also have a name (shoshin, gogyo, goshin). I have never been taught this by Hatsumi Soke or any one else of the Japanese Shihan, and I have never seen the source for this. So I’m not teaching this, but I think this also is a good idea. I think it is important to always look at things from three perspectives. For example left, right and middle. The way I taught on the seminar was the following. 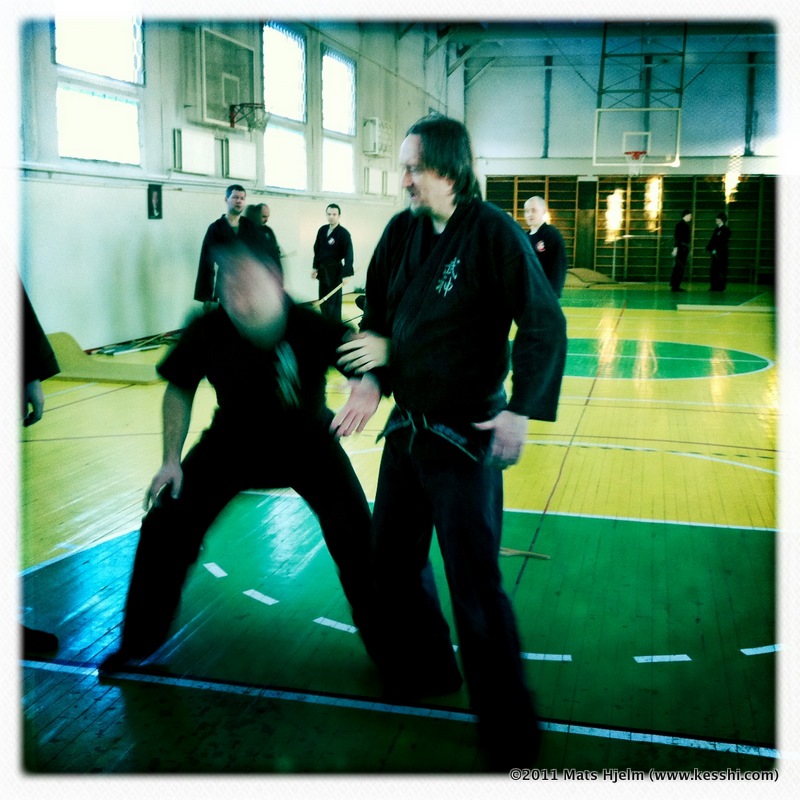 Solo training, try to get the form correct and understand all movements, angles, timing, distance, technique, kamae and everything else. I heard that even the Japanese Shihan who have been training for 30-40 years still do this every day. So there is no reason for you to think that you have already learned it. I to still discover many things when doing the forms.

With a partner you will understand the the solo training forms better. The forms you do in solo training will never bee exactly the same when done with a partner, you need to adjust according the way your partner attacks. We did the base (as I see it!) with five different blocks and five different strikes, then moved on to applications and more direct response from natural posture.

Using weapons will increase the understanding even more. If you use a weapon try to keep to the ideas we learn from the forms. But small adjustments are done according the characteristics of the weapons used.

This 45 minute video from the seminar is available for instant download at BUDOSHOP.SE 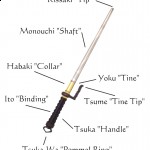 The jutte or jitte (十手), literally meaning “ten-hand” (i.e., the weapon with the power of ten hands), is a specialized weapon. In Edo period Japan the jutte was a substitute for a badge and represented someone on official business and was carried by all levels of police officers including high ranking samurai police officials and low-rank samurai law enforcement officers (called okappiki or doshin). Other high ranking samurai officials carried a jutte as a badge of office, “aratame” or official inspectors including hotel, rice and grain inspectors carried a jutte.

On Sunday we did the six techniques from the old Hanbo, Tessen and Jutte book published by Hatsumi Soke in 1984 ca. It has six basic techniques, we did them all. In 2003 the Bujinkan theme was Kunai and Hatsumi Soke taught five of these techniques using a Kunai. The weapons are different so adjustments need to be made according the characteristics of these weapons. 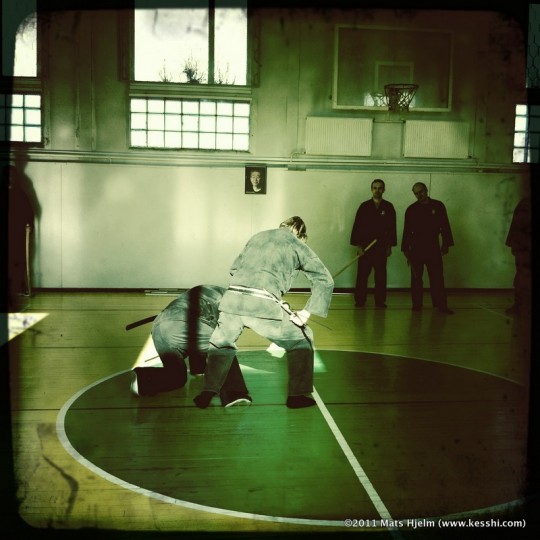 We studied the following techniques with Jutte in mind (not Kunai), first the basic form and then variations and applications.

The training both days seemed to be successful and everyone seemed happy about it. I sure had a good time both in the dojo and outside before, between and after the trainings. The first time I was in Latvia in 2002? I asked about traditional masks but I didn’t know so much about them that they understood what I meant. So after the training Juris surprised me with a mask I asked about nearly ten years ago.

The arrival of masked visitors 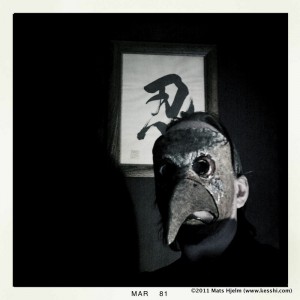 This practise is variously referred to as budēļi, čigāni “gypsies, going gypsying”, kaladnieki, ķekatas, maski “masks, going masking”, nabagi “the poor ones”, etc. Although this practise could occur at any time of the winter (between Mārtiņi and Meteņi ), it was particularly common on Christmas eve. It is strongly reminiscent of the tradition of mummers and mummering in Great Britain and Newfoundland.

Latvian “mummers” might dress up as animals (bears, horses, cranes) or as Death. They would go from house to house and were warmly greeted, as they were assumed to drive away evil spirits. They would arrive in groups in front of the house, and sing songs and dance. Then they would be invited in and fed with bacon buns (pīrāgi), butter, sausages, and given ale to drink. They made a special effort to disguise their voices and mannerisms, so that no one would be able to guess who each one was, but if a mummer was correctly identified, he or she would have to “unveil”, i.e. remove the cloth which was covering their face.

It is still common for children to be required to recite an appropriate verse before receipt of their presents (there are many).

Oh my, Christmas time
The lads are fat, the horses lean;
The lads get beer and whiskey
But the hay racks are empty.

I’m happy about the whole seminar, and especially happy that people also came from the neighboring countries Estonia and Lithuania. I was asked to come back after summer, maybe in August. I’m already looking forward to it.

Thank you Juris and everyone who attended and made the seminar possible.